Regular readers of this blog will know that The Irish News reporter Allison Morris has figured more than once in these columns and usually not in the most flattering light. That had been because of her dishonest approach to the story of the Boston College oral history archive subpoenas, about which you can read here and here.

With the latest PSNI subpoena served on former Loyalist paramilitary Winston ‘Winky’ Rea, Allison was at it again in last Saturday’ Irish News with a story that was plucked either from the air or from a rather disagreeable part of her anatomy.

I reproduce the offending articles below but in summary Allison claimed that in his interviews with Boston College, ‘Winky’ had spilled the beans about the killing of renegade Loyalist Frankie Curry and because the murder happened after the Good Friday Agreement he would be liable for a lengthy prison term.

The timing of the article, saying that the PSNI would be pursuing this angle, was a critical part of the story. Rea’s lawyers were appearing in front of a judge the following Monday in an effort to persuade him that the PSNI was on a fishing expedition and here was a front page article linking him to a notorious murder which the judge in all likelihood would read.

Knowing that in fact Rea had not talked about this event at all I wrote a letter to the editor of The Irish News, Noel Doran correcting her account. Needless to say the letter has not been published but three paragraphs plucked from my letter, none of which address Ms Morris’ role in this affair, were added on to a news story today (Wednesday) about Winston Rea (see final Irish News piece below).

I reproduce the full letter below and serve notice on Mr Doran that this will not be the end of the matter.

Letter to the Editor

Last Saturday, February 7th, your correspondent Allison Morris wrote, and you published, an article claiming that Winston Rea, the alleged Loyalist leader, had spoken of the murder of Frankie Curry in interviews he gave to the Boston College oral history archive.

The effect of her article, published before Monday’s court hearing, was, arguably, to substantiate the Crown’s claim that the PSNI were investigating serious matters concerning Mr Rea and that this justified their efforts to obtain his interviews from Boston.

Ms Morris wrote: “A leading loyalist who made a taped confession as part of the controversial Boston College project has recorded details about the feud-related murder of bomb-maker Frankie Curry”.

And: “The Irish News understands that Rea openly discussed the internal process and build up that took place prior to Curry’s murder in his interview recorded almost 10 years ago.”

As the former director of the Boston College oral history project I am, like the interviewers, pledged never to reveal what interviewees said or spoke about in their interviews until the terms of their embargo have been fulfilled. But there is no bar on myself telling the world what is NOT in a person’s interview.

Accordingly, I can say with the utmost confidence, that not only does Mr Rea not discuss the late Mr Curry’s death in any way but his name does not even figure in his interviews.

I think I am entitled in these circumstances to query the bona fides of Allison Morris’ source for this fictional story, given the damage it has caused to Winston Rea. Can I suggest it is very possibly the same source who told Ms Morris’ close friend Ciaran Barnes back in 2010 that Dolours Price had discussed the disappearance of Jean McConville in her interview for the college archive, when she had not.

All Ms Morris had to do was pick up the phone or email and I would have happily confirmed all this for her. But she didn’t bother. After all, why let a few facts get in the way of a good story!

The attempt to obtain Winston Rea’s interviews, as will become clear with the passage of time, is nothing less than a cynical fishing expedition by the PSNI aimed at satisfying sectarian elements in the Irish-American community that they intend to balance their raid on IRA interviews at Boston College by bagging a ‘Prod’ in their net. Winston Rea is being pursued not in the interests of justice but to satisfy narrow political goals.

That, I suggest, more than disgracefully inaccurate speculation, should be the focus of your paper’s coverage of this topic. 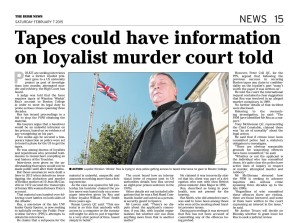 The Shadows and The Gunmen

Where the Bodies are Buried

• N. Ireland papers on disarmament archived at BC
—  Decommissioning Papers deposited in same library as Belfast Project oral history within days of first subpoena being initiated
• Boston College's in-house press on release of Voices From The Grave
—  "Boston College is contractually committed to sequestering the taped transcriptions unless otherwise given a full release, in writing, by the interviewees, or until their demise."

Alan Meban interviews Anthony McIntyre: Belfast Project “an invitation to engage in deep moral reflection on the consequences of war”

Petition for withdrawal of the subpoena he issued on behalf of the British Government. (archive copy)

The value of the Oral Tradition is its democracy; it doesn't give to an intellectual elite the exclusive right to shape a communal memory and the collective memory. It makes into a common wealth the story of our shared lives. It's something that we share in common – and it's like a collection plate into which we can all put something: our stories, our myths and the ease with which we are able to, in some way, cross boundaries.
- Cleophus Thomas, Jr.

“… we must forcefully conclude that preserving the judicial power to supervise the enforcement of subpoenas in the context of the present case, guarantees the preservation of a balance of powers… In substance, we rule that the enforcement of subpoenas is an inherent judicial function which, by virtue of the doctrine of separation of powers, cannot be constitutionally divested from the courts of the United States. Nothing in the text of the US-UK MLAT, or its legislative history, has been cited by the government to lead us to conclude that the courts of the United States have been divested of an inherent judicial role that is basic to our function as judges.”